Our website uses cookies to distinguish you from other users of our website. This helps us to provide you with a good experience when you browse our website and also allows us to improve our site.

DPDK consists of libraries to accelerate packet processing workloads running on a wide variety of central processing unit (CPU) architectures. In a world where the network is becoming fundamental to the way  people communicate, performance, throughput and latency are increasingly  important for applications like wireless core and access, wire line  infrastructure, routers, load balancers, firewalls, video streaming, Voice over  IP (VoIP) and more. By enabling very fast packet processing, DPDK is making it possible for the telecommunications industry to move performance-sensitive applications like the backbone for mobile networks and voice to the cloud. It was also identified as a key enabling technology for network functions virtualization (NFV) in the original European Telecommunications Standards Institute (ETSI) NFV White Paper.

DPDK was created in 2010 by Intel. The open source community was established at DPDK.org in 2013 and has facilitated the continued expansion of the project. Since then, the community has been continuously growing in terms of the number of contributors, patches and contributing organizations, with 10 major releases completed including contributions from over 400 individuals from 70 different organizations.

“DPDK is a key technology that enables the  communications industry to move to a virtualized infrastructure. As a global  leader in telecommunications and information technology, we see strong open  source community support as an essential element to building high performance  networking solutions for the cloud infrastructure,” said Zhang Wanchun, Vice  President of ZTE and Principal of ZTE’s Wireless Product R＆D Institute. “We will  consistently support the development of the DPDK project and collaborate with  industry peers to help build and shape this technology for the  future.” 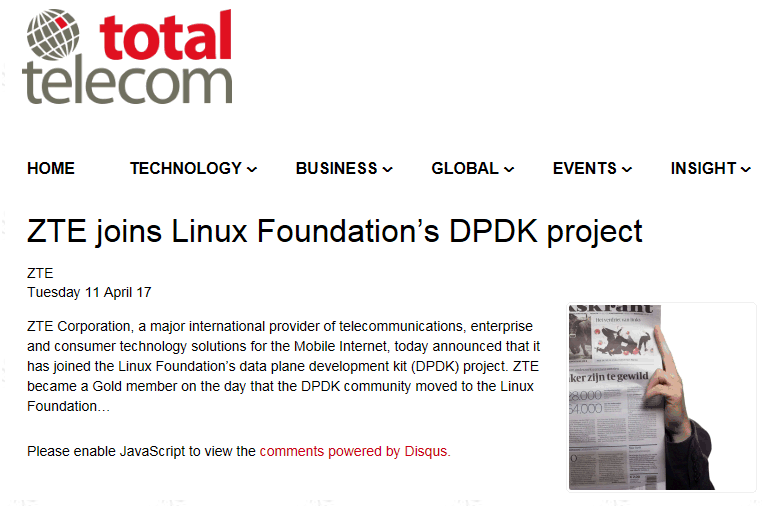